Reported in the Flytipping category anonymously at 14:14, Tuesday 7 January 2020 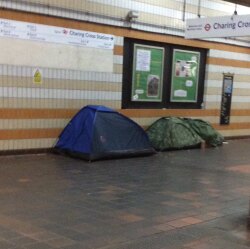 Homeless people are congregating in the subway, drinking and taking drugs, they are aggressively begging and making sexual comments to lone and small groups of females, I’ve seen them fighting amongst themselves as well as exposing themselves and defecating in the subways, this is unacceptable in a major tourist and commercial area