Rubbish dumped on the Strand outside lloyds Bank

Reported in the Flytipping category anonymously at 12:02, Wednesday 15 January 2020 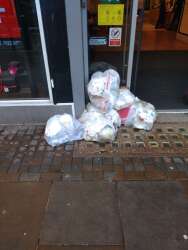 6 medium bags of rubbish that's been done for at least a week according to staff at lloyds bank. Rubbish is being dance by unknown person/s.