The drain outside 63 Winchester street is broken and is causing water to flood into the basement vault under the pavement. This has happened before and was rectified when the council fixed the drain.

Reported in the Flooding from a blocked drain category anonymously at 13:02, Wednesday 15 January 2020 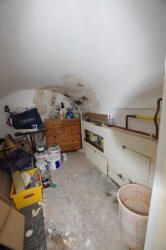 Drain water is seeping in to the electric cables in the basement vault and the mould is spreading.