Recycling bin fit to burst , being used as a rubbish bin

Reported in the Damaged, dirty, or missing bin category anonymously at 21:10, Sunday 2 February 2020 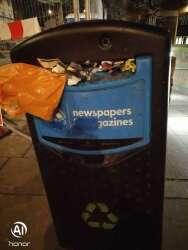 Bin being used a bin for rubbish instead of rycycling. Probably best removed?? May end up with another bin on fire, as I reported to LFB earlier in JAN.. its located at the RAMP entrance to Pimlico underground..