Three potholes in a row. Most likely deeper than 5 each. 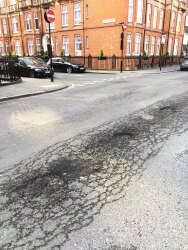 Infront of number 14-16 YORK Street are three large holes on the road.

They have been there for several months now.

Hazard for cars and hazard for people crossing.