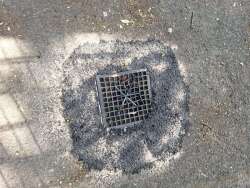 Drain cover is broken and has attempted to be fixed with ties but is still broken. Tarmac has been put down around the area but hasnt resolved issue.