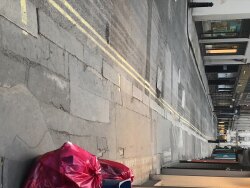 Outside 49 Beak Street (the news agent) and opposite Upper James Street, a manhole cover which literally goes up and down every time a car passes over it, making lots of noise. It has been fixed in the worst possible fashion, rather than fixed to actually be fit for purpose. It is also dangerous in the street for bike riders as they cannot see the fact that it lowers with weight and how deep the hole becomes in the street since it appears to be a flat surface.