Reported via desktop in the Flytipping category by Rob Kirk at 11:47, Thu 8 October 2020 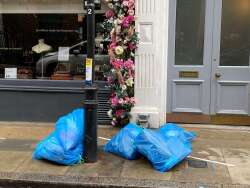