Reported via desktop in the Animal Nuisance category anonymously at 15:39, Mon 12 October 2020 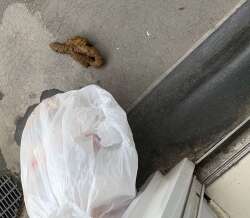 Dogs fouling in communal areas is on going and growing problem of our estate. It is unacceptable of the dog owners, the fact that they do not clean after their pet. I do not believe that anyone will not be offended and disgusted to find in their door step that someone or something has weed and done number two. I refuse to believe that a human will do that but an animal who is owned by an irresponsible human.