Reported via desktop in the Blocked drain category by Gregory Lynn at 17:42, Friday 16 October 2020 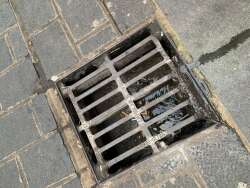 I have two surface water stacks at the rear of the Prince Charles Cinema that are backing up because they can't get out of the property. Drainage company Greenhills say the blockage is outwith our property in the street. There has been some damage caused already and more will follow if the issue is not cleared soon. If it gets worse, Westminster will be held liable and charged through our insurance for the issue.