Reported via desktop in the Flytipping category anonymously at 14:28, Tuesday 16 February 2021 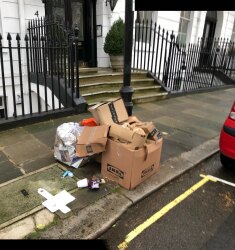 Problem ongoing for several weeks. Rubbish constantly been put here, often just after collection (the photo was taken at 12:30 on a Tuesday, after collection at 11:00). Sometimes just left in open paper bags, not even wrapped. Contents are being scattered by animals, and some residents have reported seeing rats. This has been reported to the Council more than once. Letters sent to residents do not help. The culprits can clearly be identified from labels on boxes.