Reported via desktop in the Flytipping category anonymously at 12:20, Wednesday 24 February 2021 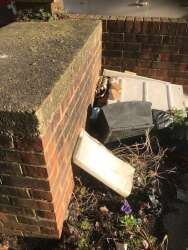 The Westminster paper recycle black containers were delivered to the address (118) but none of the residents use these historically recycle bags have been delivered ad used. The containers remain outside and have over the years fallen to the ground, this has encouraged "locals" to add small unwanted items/debris to be placed over the wall and appears to be a common place to dumb other items. This is a residential address, I have enquired with my neighbours (Flats A & B) and none of them can identify the items other than the recycle containers. There has been several different residents in the private flat (Flat D) at the top of the property, however I cannot confirm whether these 'fleeting' residents are responsible for the dumping of the items either. I have, in recent years, had mice in my property (Flat C) and this area appears to be a perfect breeding ground for vermin. Can the containers be removed? In the past I and my neighbours have always called the council to remove bulky items and paid, however I do not feel that I should pay to have these items removed as they do not belong to me despite being on the grounds.