Reported via desktop in the Street works and obstructions category anonymously at 15:32, Tuesday 2 March 2021 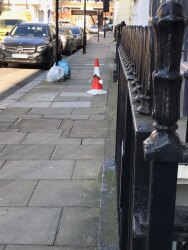 Please could you arrange for this cone to be removed (it has nothing to do with current works in St Georges Drive) It was left here since emergency gas work completed in December. It is in the middle of the pavement causing an obstruction and potential hazard to those with disabilities trying to get past it.