Reported via desktop in the Street works and obstructions category anonymously at 16:23, Tuesday 2 March 2021 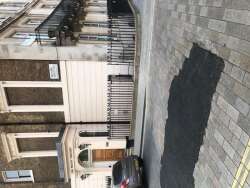 Around Motcomb Street there is good quality block stone in the roads which we re laid not too long ago. Now as per the photo this has been ruined with large black tarmac patches. Will the Council be forcing the private company to reinstate as it was before??