Reported via desktop in the Street works and obstructions category anonymously at 15:19, Tuesday 23 March 2021 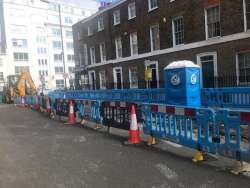 Street works drilling up the road by G Network from approx 1pm today - hotel was not notified and we have aircrew resident who were woken by the noise and have complained. We were not made aware of this drilling to install a cable as otherwise we would have allocated our aircrew to another part of the building. Please advise how long this will be going on for and advise why we were not informed as the hotel is surrounded by Gillingham Street. Many thanks Stefanie Hardy, General Manager, Park Plaza Victoria