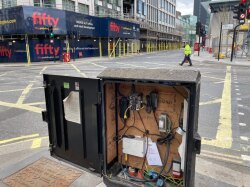 The telco box on the corner of Praed Street and Spring Street has been open for a few weeks. I suspect this is because it has been disconnected, in which case it should be removed.

If it is still connected, it is highly at risk of being vandalised.