Reported via desktop in the Flytipping category anonymously at 12:23, Friday 16 April 2021 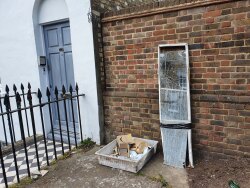 One large smashed mirror and one large box of general waste (as shown in photo), dumped at end of tree lined strip running parallel with pavement adjacent to 34 Star street, W21QG.