Rubbish dumped on Alperton Street near the junction with first avenue

Reported via desktop in the Flytipping category anonymously at 08:32, Friday 23 April 2021 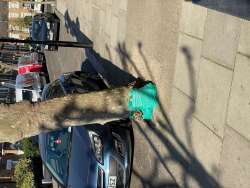 Large black bin bag containing household waste and food as well as other bugs of rubbish against the trees up the street. The large black rubbish bag was full of food and was torn apart by foxes in the night waking us up and spreading the rubbish all over the street. People are aware that foxes get into the bin bags hence why they have dumped this outside someone else's house. If this could be cleaned up it would be much appreciated. It's been there for approximately 36 hours