Scaffold over a public pavement

Reported via mobile in the Street works and obstructions category anonymously at 09:55, Thu 8 July 2021 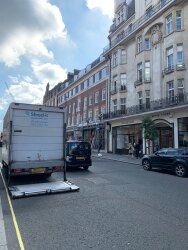 Scaffold is being erected directly over a public footpath with no barriers. It’s disgraceful you allow this to happen. Someone could get seriously hurt if a Scaffolder dropped a tube.