Bike to be removed

Reported via desktop in the Abandoned bike category anonymously at 14:54, Monday 2 August 2021 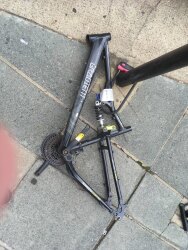 Bike attached to post outside M&S on Edgware Road has been dismantled and just frame remains.

Reported on 10 May and tagged for removal but still there !.