Leaking water from drain/water mains (?)causing damage to under the street storage

Reported via desktop in the Flooding from a blocked drain category anonymously at 10:54, Tuesday 14 September 2021 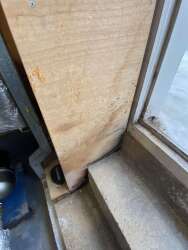 After a thorough investigation of the problem with our building maitenance company, we believe that the damage we are experiencing in our under the street storage is cause by either a leaking water or drain pipe or some breach in the space where the underground cables are kept. From the Starbucks to the other side of the road to our property, you can see that the road repairs have started to drop which we think might mean that the pipe has burst/dropped and is perhaps causing the issues. We can't really do much about the damage untill the source of the issues is 100% tackled.