Reported via desktop in the Abandoned bike category anonymously at 14:12, Thu 28 October 2021 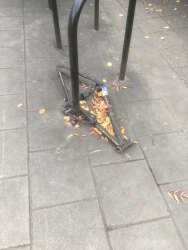 Outside Gateway school on Lisson Grove frame has still not been removed 3 months after first reported.

It has been tagged twice now!.