Bicycles in front of Paddington station

Reported via desktop in the Abandoned bike category anonymously at 20:16, Tuesday 18 January 2022 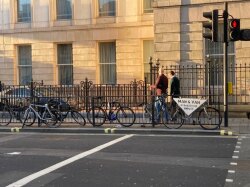 The pavement on Praed Street is narrow and always very crowded in the area in front of Paddington station.

These bicycles , including the ‘Man & a Van’ on, have been them for many months and really in the way.