Workmen repeatedly closing off the mews

Reported via mobile in the Street works and obstructions category anonymously at 16:28, Monday 16 May 2022 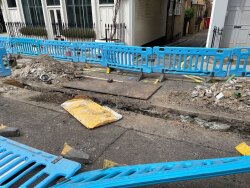 Workmen are digging up the road to instal new broadband. Just a few days after the same road was dug up by Thames Water. Great thinking, Westminster Council…

Today we have variously been blocked from leaving the mews and blocked from entering it as the workmen repeatedly closed it off. They said that we need to give them notice before requiring access. No we don’t. We have never had this problem before, we shouldn’t be having it now. Please address it.