Many bicycles and covers left on railings next to the bins opposite 90 St. George’s Square

Reported via mobile in the Abandoned bike category anonymously at 19:04, Saturday 28 May 2022 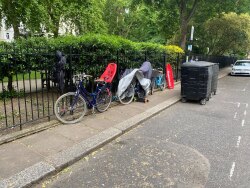 Several bicycles are being left on the railings by owners who live on the square, and the covers are being wrapped around the railings as well - the owners seem to think they can leave their property where they like. In addition to being unsightly, it takes up space on the pavement. The issue is ongoing and has been like this for many months.