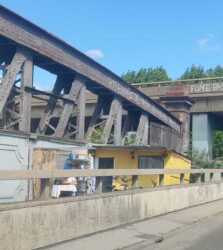 Danger to road users and individual believed to be living in side of slip road to main A40 carriage way. Reported again and again without any visible action, same response given reported to back office team by Westminster Council, who will respond in 5 days, and here we are days later with nothing. You would think this is a matter of urgency ?