Reported via desktop in the Signs and bollards category by Anthony Kilbey at 13:28, Wednesday 3 August 2022 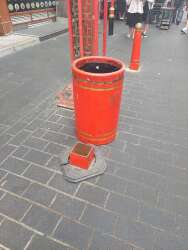 Broken bollard - previously reported. Three reports in last 2 days of people tripping and falling on it. Could it be covered with a sand bag or similar to make safe. Bin placed by it for now to deter footfall away from it. With thanks