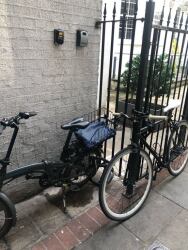 These bicycles are not authorised to be parking here and are obstructing the pedestrian alleyway and also obstructing the bins access, the communal bins access for no 1 Exchange Court. I have previously reported these but nothing has been done about it. They have even erected Keysafe boxes on the wall for the keys. Whose permission has been granted to do this?